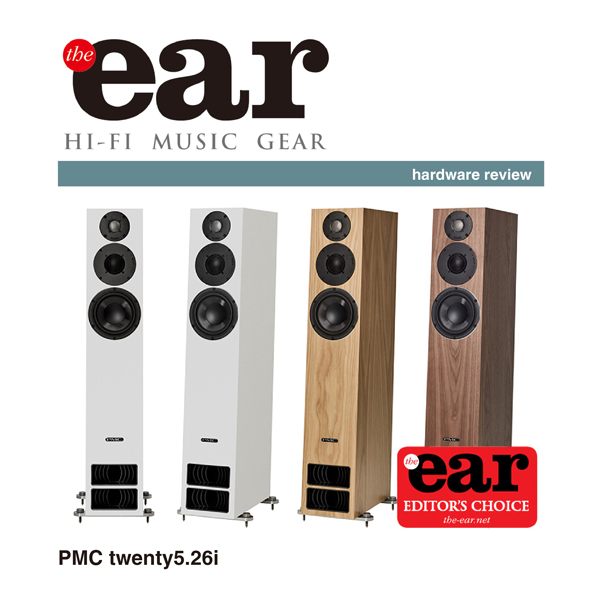 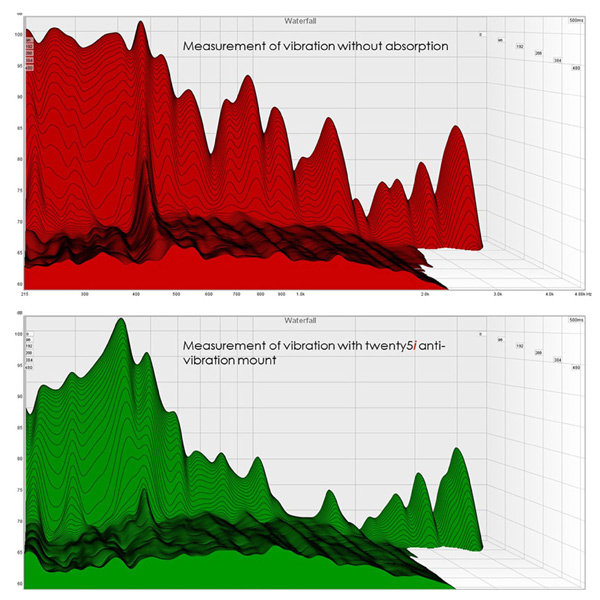 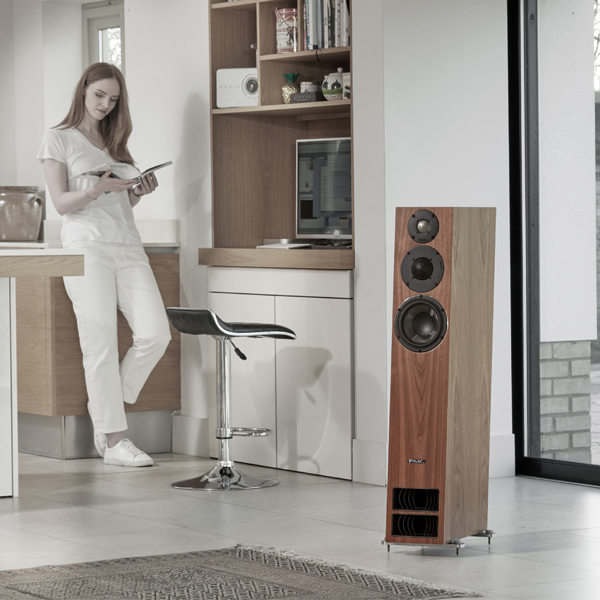 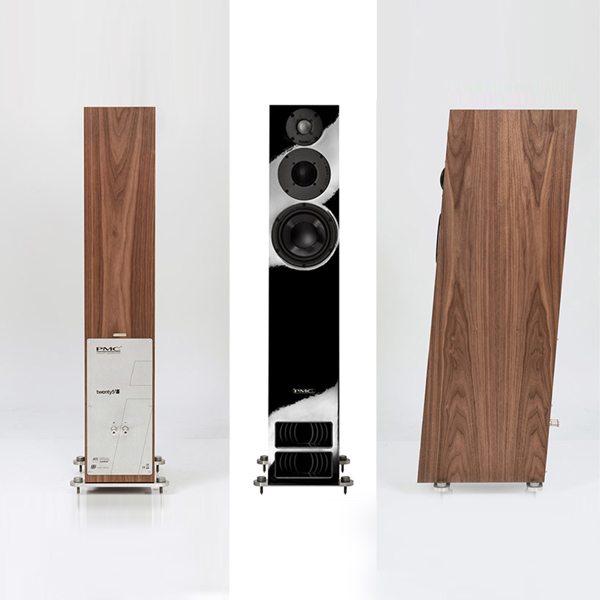 To my knowledge PMC is the only audio manufacturer of any repute to have used Townshend Seismic bases under its loudspeakers at a hi-fi show. It’s a brave move given the tendency for the audience at such events to ascribe disproportionate benefits to ancillary components. But PMC clearly understand the improvements that genuine isolation can bring to a loudspeaker and earlier this year unveiled the first models to incorporate an integral system of isolation. The two floorstanders in the the twenty5i range have anti-vibration spacers between the bottom of the cabinet and the stainless steel bars that extend the footprint. At first glance these look much like the bars supplied with the previous twenty5 series models but the addition of damping spacers mean that they are anything but.

This approach derives from the work that the engineers at PMC did on the flagship Fenestria loudspeaker announced in 2019, this included placing accelerometers on the cabinet to establish where the greatest vibrations were occurring. For twenty5i range they used the same accelerometers to measure energy travelling from the cabinet into the floor and vice versa. When a speaker is spiked into the floor energy is transmitted from the cabinet into the floor and travels to the other speaker as well as the furniture in the room, including the equipment rack. This is why isolation platforms make a difference under source and amp components. The energy also travels back into the speaker that transmitted it with a delay and all this vibration joins the energy coming from the drive units and muddies the resulting sound. See our review of Seismic bases for a greater explanation.

The isolation system that PMC have come up with is not as broadband as the Townshend one because that requires a spring system with 30mm of compression, instead they have concentrated on isolating the speaker where it is most beneficial; the midrange. By auditioning isolating materials that worked at different frequencies they discovered one that significantly reduced vibration at 470Hz and proved to be very effective at reducing both measured and perceived distortion. It consists of grommets either side of the plinth bars which isolates the fixing bolts from the bar as well as the bar from the cabinet. You are discouraged from overly tightening the bolts as that would compress the grommets and create an energy path. The waterfall plots overpage show vibration in the cabinet without (red) and with (green) the isolators in place, the significant change is the reduction in the ridge above 400 (Hz).

The twenty5.26i is the largest model in its range and the only one to feature a midrange driver, a dome at that. We reviewed its predecessor three years ago and got a great result, the combination of the 50mm midrange dome and PMC’s long throw 6.5inch g-weave bass driver is powerful and revealing. For the twenty5i range the company has introduced a new tweeter which as we discovered when listening to the twenty5.22i is a remarkably refined drive unit that brings a high degree of sophistication to the range. The tweeter has a small 19mm dome in the middle of a large roll surround, an arrangement claimed to deliver both wide dispersion and high power handling. Both qualities that are close to PMC’s acoustic heart. The dispersion factor is also enhanced by the metal grille, it’s not just there for protection.

As with all PMC speakers the cabinet has transmission line loading rather than the more common reflex loading, this means that the rearward output of the bass driver is channelled through a relatively long conduit within the box to the vents you see at the bottom. By using specific damping materials in the ‘line’ as it’s known it’s possible to ensure that only the lowest frequencies emerge from the vents, and equally importantly, those bass notes are in phase (in time) with the output from the front of the driver. As with the earlier twenty5 series the vents have fins in to reduce turbulence and improve airflow at this juncture, a technology derived from F1 racing where PMC’s head of engineering cut his teeth.

Sound quality
I have to admit that the majority of speakers that I review are perched on Townshend Seismic Podiums for the duration of the auditioning process, this is because I use these podia under my reference speakers when reviewing source and amplification and not using them would put new speakers at a disadvantage. However, with a speaker that has its own isolation system things aren’t so easy and I decided to listen with the PMCs on the ground. They needed to be fairly close to the wall, 17cm to the nearest corner, in my slightly bass light room and I initially hooked them up to a Rega Elex-R integrated amplifier. This is not the most sophisticated amplifier tonally but it does timing and musicality better than many more pricey alternatives and worked remarkably well with the twenty5.26i despite a low ish 86dB sensitivity. The result was tremendously open and rhythmically clearcut, the timing on these PMCs is spot on which makes for a very engaging listening experience. Tonally the pairing with the Rega was on the dry side but that’s to be expected and does little to hamper detail resolution. Voices in particular are comprehensively rendered, you can hear all the texture and much of the nuance of inflection which makes lyrics very clear and feelings easy to understand.

I love the way that the sound escapes from the boxes on what are fairly large speakers, this is something that is always improved by good isolation, so those grommets must be working well. Low level resolution is very good too, the coughs in the audience on Keith Jarrett’s recent Budapest Concert release were made apparent for the first time, fortunately they didn’t upset the musician on this occasion. I love the bass girth they produce with Bob Marley’s Natural Mystic too, it’s rock solid with real shape in the bass line and monster drops in the background. This speaker goes low, very low even without a muscle amp at the helm. I turned the volume up on the Elex-R and hooked up a Townshend Allegri+ passive pre to control output just to see how far the power amp element could be pushed. This increased openness and clarity significantly and produced a gripping rendition of Nick Cave’s powerful Jesus Alone, the grumbling electronica behind the beatific voice creating an atmosphere of low frequency menace, a high voltage restraint that could not be resisted.

I switched to my regular power amp, an ATC P2, and this brought a degree of extra control and a sense of power to proceedings, Natural Mystic became a lot more subtle with more going on than was previously apparent. The immediacy and presence on the World Today from Hooker ‘n Heat was vivid in its realism and this quality was audible on all sorts of music, these PMCs clearly enjoy an amplifier with some grip. There were also benefits in terms of vocal subtlety, Thom Yorke’s voice on Radiohead’s Decks Dark sounded totally effortless and the many layers of the recording were at once clarified but without sacrificing sonic unity. There seemed to be more character than usual in a Brendell piano piece too, the nature of the recording was as clear as the virtuosity of the playing. The system was really starting to sing and made me wonder if it was a case of the PMCs finally starting to run-in.

A rather interesting amplifier happened to turn up while these speakers were in the system so I tried that as well. It’s called a Moor Amps Angel 6 and is a large solid state design with very low feedback and a quite extraordinary transparency, the twenty5.26i made this clear when it was partnered with a Townshend Allegri Reference preamp and my usual sources. It took a while to establish which sources worked best, the Stack Link II network bridge and iFi iDSD Pro DAC were a little on the lean side with this amplifier andspeaker but the Auralic Aries G1 and Vega G2.1 with their full bodied character and high resolution proved a perfect partnership. The twenty5.26i is both extremely revealing and musically addictive, the combination of ease and transparency means you can listen to anything at pretty well any level and it’s enthralling. The Angel 6 is a powerful amp with a very light touch, it has no audible sense of grip, and these PMCs make that very clear.

The twenty5.26i makes an interesting contrast with PMC’s fact.8 which is a similar sized loudspeaker albeit less expensive and with smaller main drivers, which sounds more refined but is ultimately less revealing and powerful. That said the latest Signature version of the fact.8 is probably more transparent so it may well equal the wider speaker’s resolving powers, or it could do if it had the isolation system which is clearly advantageous.

The i series updates to the twenty5 series have increased prices but the results warrant the extra outlay, the twenty25.26i is a speaker I could quite easily live with thanks to a fabulous combination of transparency and musical engagement. My music is just more thrilling and enjoyable in its hands than it is with an awful lot of speakers, and while it’s big enough to produce serious bass it’s not so big as to dominate the room. The twenty5.26i needs careful partnering in both source and  amplification departments which is always the case with a revealing loudspeaker, but get those right and it’s a very hard act to beat.