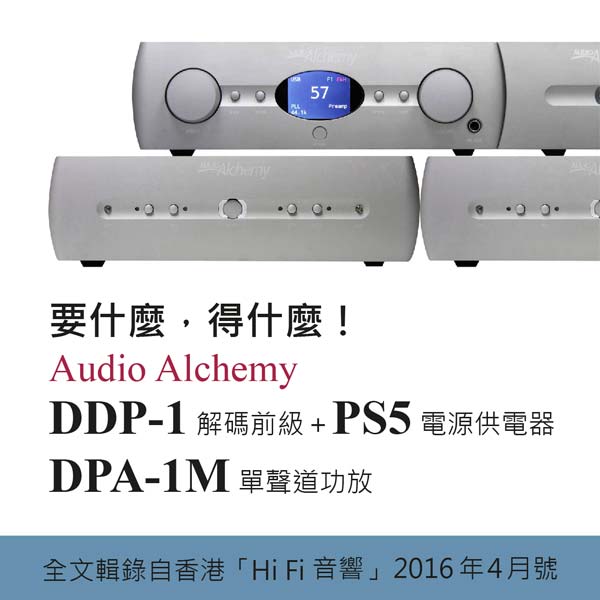 A few months ago Janet Yeung of HiFi Review heard the Audio Alchemy DDP-1 decoding preamplifier with its optional external power supply unit PS-5, partnering a pair of Adam Artist 3 active speakers. "I was deeply impressed by the massive yet coherent sound and atmospheric musical expression of the DDP-1. Then at the Hong Kong AV Expo's first press conference, a system comprising Audio Alchemy's DDP-1, PS-5 and DPA-1 stereo power amplifier (2 x 125W at 8Ω) and a pair of ELAC bookshelf speakers was used during a demo session. The pipe organ was reproduced far beyond my imagination despite being played back in a room with an area close to 1000 square feet!"

In her recent evaluation of the Audio Alchemy electronics, Janet Yeung used a pair of DPA-1M mono power amplifiers just 2/3 the size of a shoebox instead. Each monoblock is capable of delivering 325W into 8Ω! How would the system sound when driving a pair of B & W 805D3's? Let us study her remarkable report to uncover the mystery.